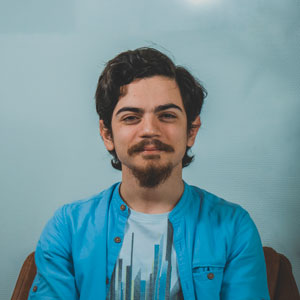 Hi, I’m Aleksandar Lazarov, from Bulgaria, a country located in South East Europe on the Black Sea, between Romania and Turkey. I come from a very large city called Varna, located on the shore of the Black Sea. During the Summer it is a very popular tourist destination and thus – very busy. However, in Winter is it very quiet and peaceful. We also have a very large, beautiful and peaceful park where you can go for long and relaxing walks. My neighbourhood is located not that far from this park and is also close to the beach

I actually first heard about Fontys through a retiring teacher, that came to my high school to speak about Fontys and the Netherlands. And now I’m studying Mechatronics over there :)

Originally, I actually wanted to do my minor back home. There I could relax from the whole Corona situation with the good weather, the nice people and the relaxed rules. However, that didn’t go as planned. Later on I heard about the minor program Embrace TEC through word-of-mouth. Two fellow classmates who did the minor program recommended it and then I saw it online. I made this choice because of the amazing opportunity to learn about other disciplines as well as the focus on personal development.

Then in the minor I chose to follow the Personal Purpose track for my own development, as it was the best way to work on myself and my dreams without any limits or restraints. I've already dreamed of making a robot that can walk but didn’t know what to add to it to make interesting, nor did I have the time before that to work in it. This was the best way for me to both work on the project and make it more interesting with the help of others.

This week we get to know the track ambassador even better and see what expectations they have of the minor and the track.

So far I’ve managed to create a shitty prototype to show off my initial concept to people, that are interested in it and gathered feedback and even ideas using it.

The concept of the leg assembly has also been created in SolidWorks, allowing for the usage of only 2 motors, which can be installed inside the robot body, allowing for fine and light legs.

I’ve also managed to gather the components I think I will need for completing the project – voltage converter, light sensors, distance sensors, moisture sensor for the soil, OLED display which will be used as a face as well, servos, Arduino with USB BT dongle and a PS4 joystick for manually controlling it. I had to learn to properly use a 3D printer as well as making 3D models, that are suitable for 3D printing, since there are size and printing angle limitations.

The main goal of my project is to help people, who are feeling lonely, by giving them a low-maintenance pet in the form of a robotized plant! This robot should tell the user how the plan is doing – did it get enough sunlight, and does it have enough water? It also should be able to walk around and follow sunlight when possible.

What I enjoyed the most so far is talking with all the people from the minor and seeing so many different ideas and ways of reaching them!

One thing I will try to do differently in the upcoming weeks is to spend less time  talking and more time working and planning!

How do you come to a ‘what’ when designing a solution? What is the intended learning goal of finding this out?

The What comes from all the ideas you might have when thinking about a solution. Sometimes these ideas are already quite clear from the beginning, but often it is developed in a Design Process. You can find many ideas, choose the best one and then develop that one further. When you make a first prototype of a solution it can become clear that it becomes much better by changing and choosing a slightly different direction.

Such a solution can also be called an opportunity. An opportunity to make a difference, to create something that didn’t exist before and that makes life a little easier of more fun for someone. We are teaching how to develop solutions to enable our students to actively shape the world around them. We want them to turn their uniqueness into value.

Different people have different ideas and motivations for doing their projects. For me, that is robotics. And more specifically - creating a robot from the ground up not just because it is fun and tickles my passion, but also to have a representation of my skill-set, acquired in Mechatronics.

Furthermore, this robot will not only be cool looking, but will also have a purpose - monitoring a plant's well-being and telling the user what the plant needs more or less of, just like a normal house pet like a cat or a dog. The reason behind this purpose is so anyone can learn the habits of growing a plant, a bit like training wheels. This can improve the mood of people, who cannot have a real pet. I am one of those people, who isn't really able to take care of a plant, but can take perfect care of a pet, but I am not allowed to have one.

Why is it important to (really) get to know your ‘who’ when designing a solution? What is the intended learning goal of finding this out?

We’re limited by our own perspective of the world while creating solutions. At the same time we are often blind to other people’s unique views and experiences. When creating solutions that actually matter and do good it is vital to be aware of this blindspot. Our efforts can only become meaningful when we check that the created design works as intended. By designing for others we learn about our own purpose. We learn about peoples needs, what connects us all and how we can create solutions that fit perfectly to make a persons life better.

The "who" in my project is a group of people, who are vulnerable and in need of help, yet not allowing themselves to speak up out of fear of society and what it might think. I am talking about people with depression. It's a horrible experience to have and going through it seems like an impossible task sometimes. I've sadly been there not that long ago and I also have a few friends, who are also struggling with it to different degrees to this day. What it does in simple terms is that it drains you from all energy and motivation. However, simple and easy tasks and reminders can always help.

Since this speaks so close to me, I thought I might try to find a way to help others, to ease the pain, using my skill set.

Why is it important to get know your ‘why’ when designing a solution? What is the intended learning goal of finding this out?

We want the students to start thinking about how they can create an impact, whether big or small, driven by their own beliefs and passions. Creating a solution for a target group in which you incorporate your own beliefs or your own ‘why’ will make a bigger impact and be more meaningful to both the creator and the end user. Whether this is volunteering in Lebanon or taking technology to a higher level; both impacts are driven by their personal purpose.

The reasons for me doing this project are many, here they are:

1st – I have a great passion for robotics and modelling. From the inspiration of many scientists, from people involved in space exploration like Elon Musk and of course sci fi movies. I wanted to channel this passion of mine into something useful, something interesting.

2nd – Throughout the years I’ve translated this passion of mine into my study choice of mechatronics. However, I have never had a project where all the skills and knowledge I've acquired throughout the past 2 and a half years of my study at engineering have been put together. And I thought it would be an amazing idea.

3rd - I also wanted to figure out how I could put this passion and these skills to good use for other. Otherwise why am I even learning any of this, if it won’t be of use to others?

4th - Lastly I wanted the process of creating my “what” to be mostly about having fun, having no stress and having no restrictions! :)