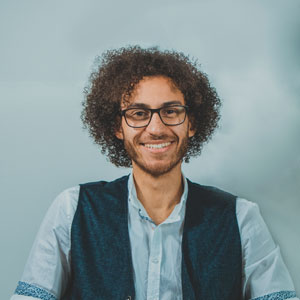 Hi, I’m Samuel Addokwei, a 23 years old exchange student born and raised in the southeast of Germany, somewhere between Munich and Nuremberg, close to the Czech border. Growing up in the cosy village of Walderbach, Bavaria I would always stand out. Not only because I was one of the few non-white kids in a town of only 2,000 people, but also because I was raised in a non-denominational Christian home within an otherwise strictly catholic environment. And well, what should I say? I have always been pretty loud, very active and often clumsy. Doing track and field as a child helped me put those high energy levels to good use.

From early on in life and later on when working I was fascinated with technology & science. And that is why I started my B.Eng. in Engineering Physics at Deggendorf Institute of Technology. Moving to this (still small) Bavarian city, with less than 40,000 residents and about 6,000 students, was a big step for a country boy like me. In the beginning, it was scary. I was insecure and unsure if I had what it takes to do this bachelor. Still, I was eager to learn and even more eager to make it, so I spend my semester breaks working and spend many of my nights studying in my 16 square meter apartment - except when it was time for sports :)

How I ended up at the minor Embrace TEC is quite a long story. First, I wanted to gather practical working experience by doing an internship abroad and was accepted by the R&D department of ASMPT in Hongkong. Due to the political situation over there at the beginning of 2020, we changed the location to the Singapore facilities. I terminated my accommodation and prepared to go, not knowing that my visa would be cancelled last minute. In the following months, I made multiple attempts to travel oversee. All applications were rejected eventually. Because of this I almost gave up on going abroad as a freelancer when I made a last ditch effort by asking our international office to try it via Erasmus. Being way too late for applications, the Minor Embrace TEC at Fontys Pulsed was the only program available for late sign ups. How lucky for me!

I was excited about going to Eindhoven, especially when I learned that TEC in Embrace TEC stands for Technology, Entrepreneurship and Creativity. My excitement increased even more when I heard about the available tracks. Especially when I heard about the Business and Entrepreneurship track because for sometime now I already knew that I wanted to eventually try and build my own company. For that I even applied for a scholarship that focuses on start-ups and business connections. Even though I was rejected, now I feel like I have a second chance to get into that!

This week we get to know the track ambassador even better and see what expectations they have of the minor and the track.

I started with no experience in the sport Korfball, entrepreneurship, or manufacturing with wood & plastic.

The first Prototype was built quick and dirty with leftover wood, cardboard, a rubber band and the lid of an old juice botte. We had to include technology, so we added Microbit scoreboard. Since then, we developed a lot and due to my partner Justice, pretty fast.

With this prototype we gathered feedback from the initial user Erik and started to build a second Prototype with an improved concept. I learned a lot about making drawings with Inkscape and working with the Laser cutter. We also start to try different materials like plastic.

Parallel we work on our social media appearance. I am handling the @KORFBOARD Instagram page. We visited PSV Korfbal in Eindhoven to connect and gather feedback from potential customers. Further topics like our Logo, manufacturing, patent, sales chain, maybe even a website, will be tackled next.

What I enjoyed the most so far is getting positive feedback and realising that there are many people in the world that actually want to help you with your projects.

What I will try to do better from now on is to find a better balance between work and private life.

These entrepreneurs provide the students with valuable insights, inspiration and, most importantly, actual help in taking the next step during the process student have with getting from a business idea to a realisation of that. What I often see is that these entrepreneurs make their whole network available for the students or that in an organic way a mentorship arises between the student and the entrepreneur.

One of the most inspiring days of the Entrepreneurship Track was the very first fieldtrip, when we visited NULZES, a collective of 18 self-employed individuals or small companies. The collective provides a working environment, where everyone can profit from the shared knowledge and resources. With their name and reputation, they are able pull big jobs.

Drive for most entrepreneurs is to have the freedom to work as an individual on your own tasks and goals. Many members of NULZES use this environment to grow their business up to multiple employees. If they want, they can leave the collective, stand on their own feet and make space for a new member.

For me this trip was so inspiring, because I learned more about what I am looking for in my future working environment or employer. Especially in the beginning, every entrepreneur needs more experienced connections for guidance and collaborations.

deepdive: zero to one

For everyone, the zero to one process looks different. It is very often the assumption that you can set up a business through a predefined roadmap with for example 8 steps. Practice often shows and proves that it’s not that easy and that there is more to it, to come to a concrete business that actually makes profit.

With the zero to one approach in the track we ensure that students keep on moving in their own business process but also in their personal growth. They make concrete steps within the topics where their drive and motivation lies. For one student this may be making a prototype and for another it may be getting his target group clear and well defined.

Furthermore, we are focused on finding the shortest way to 'turnover' together. This means that a business plan/pitch is for us a tool to achieve the goal to set up an own business.

From the beginning, my main focus was on thinking about the basic concept and building the KORFBOARDs out of wood sheets with the laser cutter. In the Business Track, we learned about the importance of stories. I knew it should make people hooked, be informative and foremost the truth. Still, it was quite difficult until we met Inneke Hurkmans. I didn’t think about what to say and told her that we are two non-Dutch guys inventing a Korfball board game and never played the sport. She saw my excitement and said, “this is your story”. She loves two cowboys who are completely out of character but do it anyway.

At the moment, we try to find manufacturers that can produce the first patch of KORFBOARDs. Also, we are working on our branding and design for the box and finalizing the product based on multiple rounds of user feedback.

We support our students from material to knowledge and support them in their self-education. Could you explain briefly why and how we do this?

The program is composed of a number of very concrete ingredients/activities with which we build the teaching days. These are: - 90 minute sessions by teachers, - a workbook to make a kickstart per topic yourself, - one-on-one business coaching, - fieldtrips to companies and with entrepreneurs  & - guided working time.

We seek a balance between student and teacher driven activities and between improvised & planned offerings. Ultimately, the "movement" the student makes in their learning and realisation process continues to guide who or what is needed in terms of knowledge and skills. Each phase within the track and execution of the minor we work on alignment and challenge ourselves and the students to find the right flow together.

I really liked meeting Lotte Geertsen from TMC. She told us about employeneurship, the mentality of people driving technology and how the employee is seen as the most valuable asset. Lotte started working part-time in a TMC facility called the Entrepreneurial Lab. Here, the employees can use the provided resources and technologies to work on their own projects or even use them as a stepping stone to start their own business.

Eventually, Lotte had ambitious dreams of bringing the Entrepreneurial Lab to the next level. She prepared arguments and a detailed action plan on how she wants to do it. I could especially relate when she explained how she was afraid and that she had to take all her courage to ask the management if she can dedicate herself full-time to that course. Today, she is the Director of the Entrepreneurial Lab, which became the fifth pillars of TMC.