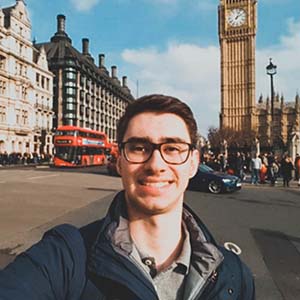 Embrace TEC changed the way I look at engineering. I used to see design
or a product as the end goal. During the Minor, I realised engineering itself is just
a tool. The process begins much before having a product, it starts by figuring out customer requirements with an emphasis on truly understanding the end-user.

How would you describe your experience of the Minor?

Engineering has always been a passion of mine, and during my course, I developed the knowledge over several tools and techniques for designing and developing products. However, my major was always focused on engineering itself, with very little regard for the people and the end-users who are affected by it.

Embrace TEC offered me an opportunity to look at technology from a different perspective, offering a more human approach to look at it. It changed my design process, I used to be very determined in following a single line of thought to the end, following the exact steps that were taught to me. However, within the minor, I gained the confidence to experiment more, try alternative methods, and especially, combine varied approaches for an outside-the-box answer. It allowed me to test my own ideas and prototypes with users, collect feedback and improve the way I look at design. I was also very interested in their teaching style; it gave me, as a student, much more control over what interests me and the areas I want to grow in.

The shitty robot will always be my favourite part of the minor! Coming from an engineering course and working with precision, specifications and calculations for perfect machines all the time, the idea of the shitty robot totally broke my stereotype of a design process. I lost the fear of making mistakes and instead enjoyed testing out several different ideas, as crazy as they were. We ended up making a slot machine kind of robot that would give candy at random as a prize. Since it can’t be a shitty robot if it works, the machine broke after a few spins during the trial with the children, but their interest and excitement drove us to improvise and make sure the show could go on. We managed to keep the kids spinning and waiting for a prize, and manually threw in candy as they “won". The joy on their faces when trying to interact with the robot was more important than any mechanical design at that point. We also learned that kids get hyperactive with candy and made sure the year after us was not allowed to use it as a prize!